And Why the Left Lies About It

The criminal should be of great interest to us. Despite all of the advantages and legacies of long-dead geniuses that society provides, the criminal chooses to risk his access to society.

So what features of society are so unbearable to humanity that some choose to forfeit their standing in it?

Societies exist on a spectrum of free on one side and equal on the other. Freedom and equality are inversely related 1 – that is, the more that we have of one, the less that we can have of the other, generally. De Facto equality (equality of outcome) does not occur spontaneously in nature. Social animals tend to choose bare fairness over mandated equality, and the same appears to be true of civilization. Equality must be enforced at the cost of liberty. It must be regulated and taxed into existence. The extreme of such measures are tyranny. Freedom, on the other hand, is more naturally occurring but frightening for many people. The extreme of freedom is chaos. This study neglects the extremes but focuses on the nature of crime on this freedom-vs-equality spectrum.

What follows will be a statistical analysis. Please do not be intimidated. At the end, I will conclude with what I believe to be some rather profound facts about freedom, crime, the relationship between leftists and government, and beliefs of modern leftism.

[Naturally, I neglect societies that are neither completely free nor completely equal for variable isolation and for practical considerations since such societies tend to either not exist or not release data.]

I plotted those two data sets on the same graph, but of course, that is not good enough to gauge a relationship between two things. We have to conduct an objective measurement. I fitted a linear regression model to the data, which is a fancy way of saying a line that passes through the data that minimizes the average distance of data points from the line.

Small values of the freedom index correlate to less freedom while 10 is the most freedom. You can see from the graph, that the more freedom means less crime. As freedom increases, crime decreases, or a lack of freedom causes more crime.

Now, to make sure that we don't have so much randomness in our dataset that our measurement is arbitrary, we have to be a little bit more rigorous than that. Every measurement, whether taken in the physics lab or statistically, has an error. In other words, the true measurement is actually a range of values, or in this case, a range of different lines. Let's make sure that the range of possible lines are not zero, because zero slope to the line would mean that there is no relationship between crime and freedom. The image below includes the error (the "standard error" in statistical measurements). Take that error (1.094), subtract it from the slope (-5.063) to get the minimum slope of the line and then add it to the slope to get the maximum slope of the line. That gives us our range of values for our line, and it does not even come close to zero. We also have confidence intervals in the image below for the statisticians.

The relationship holds for our sample. Lack of Freedom = More Crime.

Identical arguments hold for crime data 2 and also equality data 4, but this time equality is measured to decrease with higher values. Unfortunately, there is a special interest problem with the equality indexes that is far less significant in the freedom index. With equality indices, I could only find adequate sample sizes of data that was produced by governments. 5 Government cannot be trusted to provide information that may make itself look bad. 6|7|8

There are other methods of determining the relationship between equality and crime. One study isolates the relevant variables and logically concludes that absolute poverty, not inequality, results in increased crime. 9 Unfortunately, while the study is sound, the conclusion is for a single country, China. At least in China, it has been proven that absolute poverty results in crime – the lack of having something to lose creates more crime, which should not be surprising.

Inequality has no observable relationship to crime rates.

The Criminal is Born from Oppression – The Very Thing that Creates Equality.

So far, my discoveries should not be particularly shocking. Criminals are motivated by what they lack. The criminal is not motivated by what others have. We could have extreme levels of inequality, but if the poorest man still has his basic needs and the freedom to improve his situation legally, then he is unlikely to risk what he has and what he could have by turning to dishonest means.

On the other hand, if he does not have the freedom to improve his situation legally, he will more likely turn to crime. People are more willing to risk their privileges and become the enemy of an oppressive state. People are less willing to risk their rights in a freer society. If a state emphasizes equality over freedom (and it will because it serves its interest to do so), then the state will have to become more powerful in order to mandate more equality. This comes at the cost of freedom and higher crime rates. Furthermore, more oppressive governments will also have more laws, so being classified as a criminal is more likely since more behavior is criminalized.

Equality of Opportunity vs The Left

The equality of opportunity ideal simply states that all people should be judged based on their merit, that all people begin equal to each other, but may use their talents or hard work to rise above others. In the marketplace, opportunities are given to those with more merit than others. Another aspect of this ideal is that customers are not discriminated against – the goods or services of an endeavor will sell to all customers willing to buy and no customer will be charged more or less than another.

If society is free, and the state is not creating inequality by choosing to aid some businesses over others, then the ideal of equality of opportunity should naturally evolve. Businesses have to choose the best candidates in order to sell goods/services to the most customers. Businesses can't afford to discriminate applicants based on anything other than merit, or their competitors will have better applicants and eventually produce better goods/services. Businesses can't afford to discriminate customers (by charging some more than others, for instance) because people's freedom to choose competitors will harm the business's profit.

If a business has state privileges on the other hand, it can afford to discriminate against applicants because state privileges will keep the business from failing. It does not have to compete. Applicant discrimination will necessarily result in only hiring people that agree with the current state's administration, since the business is being propped up by the current state's administration. The privileged business can also afford to discriminate its customers, since it receives funding via force (taxes from the state).

Equality of opportunity necessarily means that the state cannot (and should not) be involved in the economic sector. Without state involvement, people cannot afford to discriminate because it is not profitable. Discrimination does not produce good practical results.

In either scenario, state or institution involvement is necessary to force a certain outcome. These people want the state to force their morality onto everyone else. The term for that is "statist".

The "crime is caused by inequality" argument, is the newest form of statist propaganda. It ultimately means: man is dangerous when free. Similar narratives over "racism", "hate", and "extremism" are also untrue. 10|11|12|13|14

[1] Offield. "The Mother that Hates Us, The Father that Left Us". The ARKA Journal.

[6] Offield. "Information Control in America: The Cause and the Solution". The ARKA Journal.

[7] Offield. "The US Government's Role in Censorship and Redirection Online". The ARKA Journal.

[8] Offield. "Sins of the US Security State Agencies and Their Servants". The ARKA Journal.

[11] Offield. "Propaganda & the Nationwide Monitoring of Conservatives during the 2020 Election." The ARKA Journal. 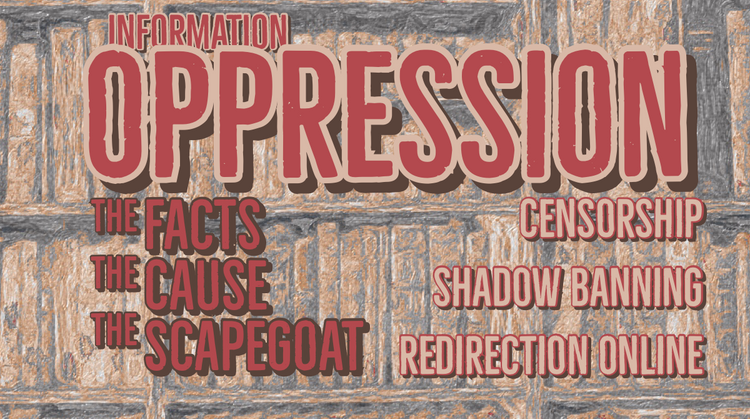